A survivor of domestic violence she speaks and writes frequently about the topic for local and national audiences.

I Have a Past

I was the Editor of the Hyde Park Herald at 22. Sitting next to me in plaid is my political editor, the amazing David Axelrod. He was 20. We're all at the Eagle Saloon near the University of Chicago.

Not Your Average Joe​

In 2013 I was invited to the White House to represent survivors of domestic violence. Former Vice President Joe Biden urged congress to keep our daughters and granddaughters safe. 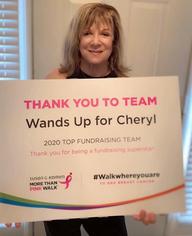 My Story: As told by the FJC

It began as a personal journey, and has bloomed into so much more thanks to recognizing a need and a bit of magic. more >

Ms. Kravitz has received over 40 local and national awards for her accomplishments in community relations and writing, many for her work with the American Red Cross. She received Leadership Washington’s Community Business Partnership award for the partnership between the NCCJ Board and the Washington Post and the Outstanding Advocate award from the Montgomery County Family Justice Center Foundation for her efforts to combat domestic violence. In Chicago, she was honored by Women in Communications for her investigative reporting. In Oklahoma, she received the Bronze Quill Award from The International Association of Business Communicators for her column in The Tulsa Tribune and the Silver Link Award for her collaboration with media from the Public Relations Society of America.

She developed and directed many highly acclaimed innovative projects, including Friends Outreach for Domestic Violence Intervention Services in Tulsa, and the Media Day of Dialogue and Cinema and Conversation in Washington, DC. She led two successful capital campaigns in Tulsa for the American Red Cross and Domestic Violence Intervention Services.

Ms. Kravitz is a volunteer leader in her community. She was appointed by former Governor Martin O’Malley as Vice-Chair of the Family Violence Council for the State of Maryland and former Montgomery County Executive Isiah Leggett to the Montgomery County Hate Violence Committee where she served as Chair of Community Outreach. She has served on the boards of the Jewish Coalition Against Domestic Abuse, the Family Justice Center Foundation, and the Domestic Violence Coordinating Council, in Montgomery County, as well as the statewide Maryland Network Against Domestic Violence. She worked as an elected member of the Board of Education in Tulsa.